The Economics of Policy: Prohibition and Free Water Supply

Politics, policy and economics are all parts of the same set, and are inter-dependent. Here I discuss the economics of policies such as the ban on alcohol in Bihar and the free or subsidised water supply in Delhi.

The alcohol ban in Bihar was widely seen as a policy formulated in response to women voters' demands. The promise of free water was part of the Aam Aadmi Party (AAP) manifesto in Delhi.

Many NGOs have proposed that potable water should be considered a human right, as water is not a luxury but a necessity. (Besides being a necessity, water also has a cultural and religious hue to it.) And keeping water outside the control of profit-maximising institutions is their consistent appeal. They claim that such private interference would widen the gap between the poor and the rich.

The WHO/UNICEF Joint Monitoring Programme Report of 2017 says that 844 million people live without access to clean water. Everyone is familiar with the condition of women in areas like rural Rajasthan, where they have to walk miles to fetch water, costing them time and energy and making them vulnerable to crimes. Likewise, a case was reported where parents were reluctant to give their daughters as brides to a certain village because it did not have a water supply, and their daughters would have had to fetch it from another village.

Despite these difficulties, recognising free water as a human right is not achievable. Rather, affordable water should be our policy direction.

According to the World Economic Forum, global water crises are the biggest threat the planet will face over the next decade. Even in such a context, the Aam Aadmi Party's celebrated manifesto contained the promise of free water as a key attraction.

Undoubtedly such policies fetch political gain, but they are also an economic disaster waiting to happen. Let us see how.

Let us first assume that water is provided completely free of cost, without regard to the number of units consumed. In such a situation people are unlikely to use water judiciously, as they will not fear high water bills. For example, per capita water consumption in Ireland is two or three times that in the European Union, because in Ireland water is free and unmetered. But the Government is considering introducing charges in 2019 (Irish Times)

Water pricing also enables revenue generation which can be utilised across sectors and help in improving water network. If water is provided for free, then the water provider does not receive sufficient payment for its services.  Consequently, the provider is not able to maintain the system adequately, and, hence, the quality of services will deteriorate. Eventually the system collapses, and people have to drink unsafe water or pay excessive amounts of money to water vendors, while wealthy and influential people receive piped water directly into their houses, at subsidised rates (Savenije and Zaag 2002). Hence water pricing is an important instrument to break the vicious circle of the 'free water dilemma'.

The World Economic Forum estimates that by 2030 there will be a 40 percent global shortfall between the forecast demand for water and the available supply. It is also possible that in the next 15 years or so this will lead to a global food crisis with a projected shortfall of up to 30 percent in cereal production (Mullally, 2014).

There is also the 'deadweight loss' in revenue to be considered as water prices are reduced to zero, as shown in the figure below, which reflects foregone revenue from individuals or institutions that were willing to pay but will no longer have to.

Or, let us consider the case where water is provided for free up to a certain level of consumption, as for instance in the National Capital Region or South Africa. This policy might amount to an infinite tax. Any additional consumption (over 20 kl) would result in the household having to pay for the entire amount of water consumed, that is, anyone consuming 20.1 kl would pay for 20.1 kl as opposed to the additional 0.1 kl. This is, in essence, an "infinite tax" policy, the likes of which has never been practised in the world, not even in the world of voodoo economics. Instead of reducing corruption, this policy will lead to greater corruption - households will have an incentive to tamper with meters to ensure that they show less consumption than the infinite tax level. (Bhalla and Ramakrishnan, 2015)

If a political party is adamant on providing free water, they could restrict the number of hours of daily water supply. This may help reduce the reckless use of free water.

A 2010 resolution adopted by the United Nations General Assembly calls upon states and international organisations 'to provide safe, clean, accessible and affordable drinking water and sanitation for all'. It doesn't speak of free water. Also, the Supreme Court has in various cases declared the 'right to a decent environment including pollution free water' as a Fundamental Right under Article 21. But 'free water' is not considered to be a fundamental right. The focus should be on providing safe water and behavioural change with respect to usage of water. For example, in the Swacch Bharat Abhiyan the government did not table legislation or pass an order banning open defecation; the core of the programme's success lay in inducing behavioural change and providing dry latrines as an alternative. There were reports of mass arrests and FIRs, development funds withheld, electricity supply cut off etc in areas that were not ODF. But no similar punishment is proposed for water overuse, rather abuse. We need to inspect into Water Security Bill as proposed by the famous 'waterman of India', Rajendra Singh. The draft declared all "prohibited activities" to be cognizable offences chargeable with maximum penalties.

The Constitution of India under Article 47 directs the State 'to prohibit the consumption of intoxicating drinks and drugs which are injurious to health'. This directive principle of state policy is based on Gandhian ideology. When the Bihar government declared a ban on alcohol, it was met with praise by people who asserted that alcohol consumption is the reason behind domestic violence, depleted savings, deteriorating health and social discord.

According to a survey study by NIMHANS Bangalore, alcohol users had almost three times the rate of sleep problems, and twice the rate of presumptive heart problems and injuries than non-users. They also reported significantly greater rates of skin problems, jaundice, burning pain in the stomach, joint pains, chronic cough and fever suggestive of tuberculosis or chronic lung infections, and various gastro-intestinal problems. Heavy (and more frequent) drinking was associated with more frequent ill-health, especially accidents and injuries, chest pain and heart problems, and high blood pressure. Alcohol users were significantly more likely to suffer poorer psychological well being (an inability to enjoy activities, pain in the body, constant strain and losing sleep over worries). This may provide justification for policies like a ban on alcohol, but economists would argue differently.

It is said that prohibiting the sale of alcohol might be good for politics but not for economy. Elections are likely to spur more such policies. Let us set aside the uncertain social outcome of this ban and consider its likely economic effects.

In the figure below, Series 1 (blue) is the presumed situation before a ban, where supply, demand and price are in equilibrium. But in Series 2 (red), that is after a ban, the supply drops nearly to zero, demand remains same (or rises) and therefore, so does the price. Liquor becomes a luxury. 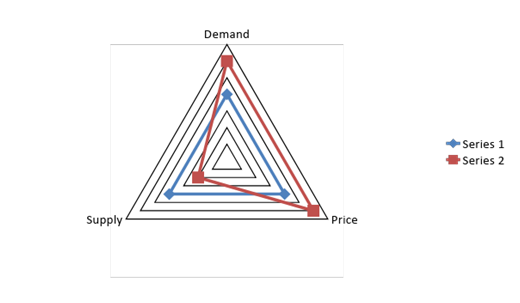 In any such situation, some individuals will be willing to pay more for alcohol, which will increase the rates of crime such as theft. Individual savings will also be at increased risk as they may be withdrawn to pay for overpriced alcohol.

Moreover, revenue generated from taxes on alcohol is used in various other state sponsored schemes, salaries to employees and for development purposes. It forms a substantial portion of most state governments' revenues. If this revenue is cut down, it will affect other dependent allocations. It is difficult to match the revenue generation of alcohol in the short run. There will also be some additional expenditure to implement the ban on sale of alcohol.

We also need to consider that some of these funds are redirected to rehabilitation centres and primary health facilities. As addicts will be directed to re-habilitation centers and if these are not equipped to serve the increased number of patients and their demands, the purpose of the alcohol ban will be partially defeated.

Such bans result in a major loss for the state exchequer but huge benefits for neighbouring states that have not banned the sale of alcohol. Any state that bans alcohol will need the cooperation of neighbouring states, which is unlikely to happen as they will develop a vested interest. It is easy to imagine a proliferation of liquor shops on state borders, and an increase in bootlegging and consumption of locally brewed alcohol, which can be unsafe. Also a shift to low grade alternatives like cough syrups or phenyl which can be lethal. Increase in substance abuse was reported to rose 30%. There will also be a loss of employment across sectors and a severe hit to hospitability sectors in the state.

Policymakers should learn lessons from the Glasgow story. The Forbes Mackenzie Act (1853), which closed Scotland's pubs at 11pm on weekdays and all day on Sundays, gave rise to a wave of bootlegging; within a decade the slums of Glasgow were honeycombed with shebeens, or illegal drinking dens selling cheap, adulterated and often dangerous alcohol, which eventually led to a repeal of the act (Mehra, 2018). Many states in India also repealed similar bans after a short while, like Andhra Pradesh, Mizoram and Haryana.

Banning the sale of alcohol is not a solution to social problems, nor is it a rational economic decision. No country or state has ever taken off and managed to create an innovative and entrepreneurial population with poor government revenue and expenditure (Kumar 2016).

Policies like providing water for free and prohibiting alcohol do not stand the test of time. Election manifestos need to take bold steps but that can only come from informed citizens, and informed policymaking.

- Image- C.J.Perry, MichaelRock, and D.Seckler, ResearchReport14 Water as an Economic Good: A Solution, or a Problem?, International Irrigation Management Institute