World Intellectual Property Organisation (WIPO) is a self-funding agency of United Nations which serves as a global forum for intellectual property services, policy, information and cooperation. WIPO defines Intellectual Property as creations of the mind: inventions; literary and artistic works; and symbols, names and images used in commerce. Intellectual property is divided into two categories: Industrial Property includes patents for inventions, trademarks, industrial designs and geographical indications. Copyright covers literary works (such as novels, poems and plays), films, music, artistic works (e.g., drawings, paintings, photographs and sculptures) and architectural design. Rights related to copyright include those of performing artists in their performances, producers of phonograms in their recordings, and broadcasters in their radio and television programs. Intellectual property rights (IPR) are like any other property right. They allow creators, or owners, of patents, trademarks or copyrighted works to benefit from their own work or investment in a creation.

We are surrounded by Intellectual Property, from what we eat to what we wear to what we sleep on.

Realising the importance of IPR in economic growth across sectors, India launched its first National IP policy in 2016. This policy bestowed entrepreneurs with streamlined timelines, fee concession, expedited examination and hearing through video-conferencing. A long-term study by Kayalvizhi and Thenmozhi (2017) using panel data from 1996 till 2004 of 22 emerging economies, including India, has shown that the number of patents registered, amongst other factors, can lead to greater FDI inflows.

One of the prime objectives of the National IPR policy is of awareness which includes outreach activities to promote Intellectual property and its protection. To make it more receptive, IP Mascot, that is, IP Nani has been launched by Cell for IPR Promotion and Management (CIPAM) in 2018. Irony to this, in reality youth doesn't know much about IPR, let alone Nani. Also, CIPAM's YouTube channel has only 4 videos on knowledge of IPR which are older than five months. Rest are crowded by fight against piracy just like television advertisements which are supported by leading actors. Unfortunately, protection of copyrights is weak by law and Javed Akhtar, famous lyricist was among many who mooted changes in the Copyright Act. However, the spotlight on copyright as 'sole' intellectual property needs revision.

Since the pharmaceutical sector and the ecosystem for biomedical R&D, which are at the heart of the debate on IP policy, is connected to the issue of affordable generic medicines, there is a huge sense of let down. Leena Menghaney, who works with Medecins Sans FrontiÃ¨res (MSF), a humanitarian organisation, says, "The policy is not new or innovative. It simply underlines IP creation and generation repeatedly without addressing the core issues facing biomedical R&D today-low levels of public investment, lack of clinical trial platforms needed to generate evidence and data and IP barriers that make licensing of technology difficult." (What drives innovation, Down To Earth)

International IP index is released by the U.S Chamber of Commerce Global Innovation Policy Centre (GIPC), analyses the Intellectual Property climate in 50 world economies. In its sixth annual international IP index mentions, India with rank 44, for the first time, broke free of the bottom ten percent of economies measured, due in part to the passage of guidelines to improve the patentability environment for technological innovations, as well as the implementation of some tenets of the National Intellectual Property Rights Policy. The country's score, that is 12.04 out of 40, however, continues to suggest that additional, meaningful reforms are needed.  It also highlights the areas of weaknesses as limited framework for protection of life science IP, patentability requirements outside international standards, lengthy pre-grant opposition proceeding, previously used compulsory licensing for commercial and nonemergency situations and limited participation in international IP treaties.
Innovation is broadly defined to include 'new to the world' knowledge creation and commercialization as well as 'new to the market' knowledge diffusion and absorption." (Dutz, 2007; pp. 2) Innovation diplomacy is a key to enduring ties among nations. But challenge to US-India innovation diplomacy is US's Special 301 Report which has kept India on 'Priority Watch Lost' for a long time. United States Trade Representative (USTR) explains India's stand for longstanding challenges in its IP framework and lack of sufficient measurable improvements, particularly with respect to patents, copyrights, trade secrets, and enforcement, as well as for new issues that have negatively affected U.S. right holders over the past year. Most recent, first ever India-US dialogue on Intellectual Property was launched by US Chamber of Commerce's Global Innovation Policy Centre (GIPC) and FICCI in partnership with the US-India Business Council is much deserved and well in time.

Patrick Kilbride from US GIPC does not see the IPR policy as a finished product. Most recently, his article in Economic Times, he mentioned, with a fully developed IP architecture, India can be the wellspring of global innovation. The promise is there, the first steps have been taken, and the future is bright.

WIPO's stastical country profile of India shows promising trend for patents and trademarks. Despite increase in patent filings and grant, GDP numbers per unit do not exhibit a pleasant picture (fig1). Also we are trailing behind China, United States, Japan, Rep. of Korea, Germany, EPO and Russia, with respect to resident applications. 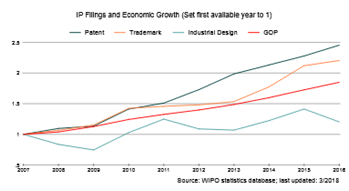 Figure 1
WIPO report also focuses on relation with income and patent applications. It was found that high income groups are in the majority but the situation has been better off in 2016 with 49.6% as against in 2006 with 79.3% (fig2). This raises serious concerns over financial inability suffocating innovation.

Indian Patent Office decorated its annual report 2016-17 with increased examination and filing rates. But patents granted in this financial year were 21.67% of filed patents. Also patents examined in 2016-17 were more than filed, clearly because previous year's filed patents were examined too at this stage. And this trend of dallied examinations is found across all forms of intellectual property.

As daunting it may seem, North-east has underperformance across all Intellectual Property especially Patents where they have collectively filed 88 in comparison to Maharashtra's 3594. Assam has outshined by filing 69 patents in comparison to Sikkim and Meghalaya's zero. North-east has incredible potential to excel in textile patent, textile designs and geographical indications (GI). To mention, Kolkata regional office caters to North-east section for IPR handling which may explain the shortcomings apart from awareness and income factors.

Annual report also highlights the sectors which have most intellectual property, this enables us to explore with sectors like textiles, handicrafts, biotechnology, biomedical, food GI among others. Further, increasing examiners in these subjects will help in efficient examining as majority examiners as concentrated in subjects of mechanical, electrical and chemistry against least in textile, civil and biochemistry.

"In the long run, innovation and employment creation go hand in hand, contributing to an inclusive and high employment economy."(OECD, 2010; pp. 16)

We should not let this policy go as a missed opportunity. More IPR education and awareness need to be diffused by creative ways like open workshops, videos of people who were benefitted, extra credits for students, among others. Internships in the field of Intellectual property should be encouraged. Also, WIPO has free distance learning (DL) certified courses, which should be encouraged to learn and rewarded equally. In schools where biotechnology is taught, knowledge of Intellectual property is not imparted which makes the subject incomplete. Further, talks with NCERT for incorporating IPR as a subject needs to come into fruition. We need to acknowledge Intellectual Property as a vital discipline which can award our nation with acclamation. Legal researchers have argued for enabling creative environment rather than burdening students with additional course. More efficient way would be where they go in hand, Atal Innovation Mission (AIM) with its tinkering labs is doing well-directed job by harnessing students with creative and innovative bent, a basic knowledge of IPR would encourage them to file for intellectual property, for their inventions at a young age. Telangana is a leading mentor to other states, for it has established first IP unit of the country. Also government has launched several initiatives like Make in India and Startup India which will have a sketchy success without availing benefits from Intellectual property. At last, as experts criticised, national IPR policy to be an empty vessel, with befitting trajectory, we shall achieve "Creative India, Innovative India".