The novel coronavirus pandemic and recession have destroyed the jobs of millions of people across the world at staggering levels. Due to lockdowns and distancing protocols, many self-employed, casual workers and regular workers were unable to work, and many were deprives of their jobs and source of livelihoods. Understandably, this has aggravated the already grim employment situation due to worldwide economic slowdown, particularly in developing regions such as south Asia, for both white and blue collar jobs.

Another report found the greatest reduction in working hours occurred in Latin America (20 per cent) and south Asia (18 per cent) in 2Q 2020. Job deprivation was highest in the informalised sector, the casual and temporary in service and industrial sectors, owing to severe lockdowns. The south Asian region has the highest share (75%) of informal workforce, especially in India, where it constitutes 81% of employment.

Job Losses in India during lockdown

The employment or livelihood of most of the people was affected during the lockdown and pandemic in India, especially those engaged in informal sector. Although there have not been any official estimates, however, several surveys conducted in India highlight about the miserly of people who have lost their jobs.

Interestingly, these survey findings also highlighted that over 8 out of 10 respondents who worked as casual labour and self-employment in informal sector said “we would get back to work once the lockdown would be over”. 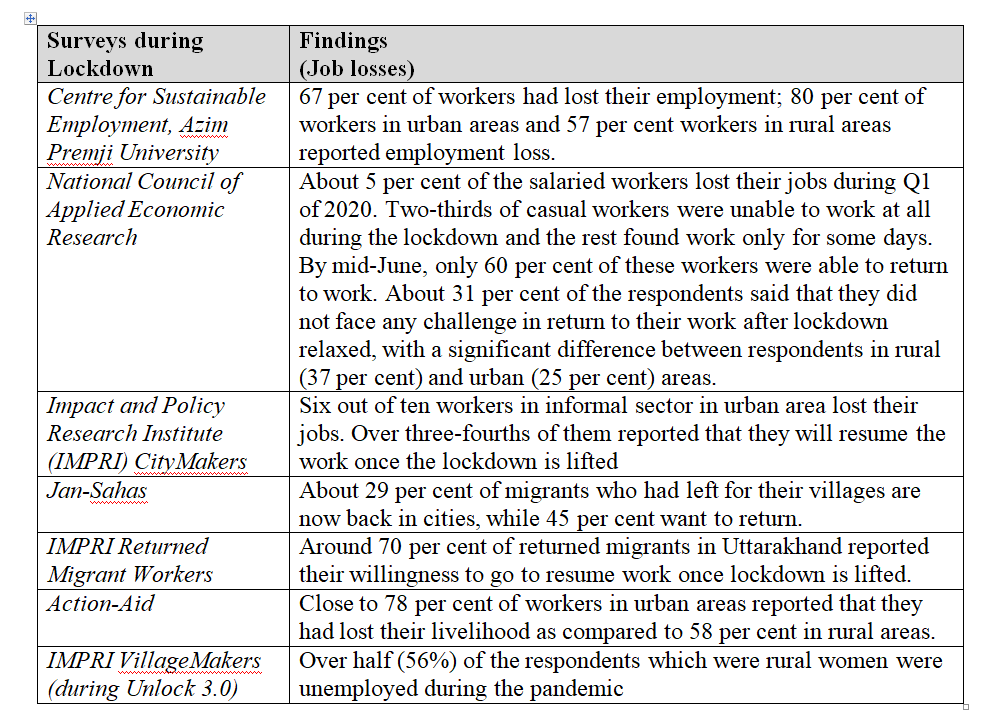 As many as 41 lakh youths in the country lost jobs due to the covid-19 pandemic while construction and farm sector workers account for the majority of job losses, according to a joint report by the ILO and the Asian Development Bank.

While the Government of India has not released any data pertaining to job losses during the lockdown, it acknowledges the quantum of migrants, around 1.5 crores, who returned to their homes. Also, government estimates suggest that around 8-10 crores workers were affected due to lockdown, mostly in the non-agrarian informal sector.

From data analysis of the Periodic Labour Force Survey (PLFS) to understand the likely impact on informal workers in urban areas during and after the lockdown period, we estimate that about 93 million informal workers are involved in the five worst affected sectors: manufacturing, trade, hotels and restaurants, construction; transport, storage and communications; and finance, business and real estate. Of the 93 million informalised workers in these sectors, 50% are self-employed, 20% are casual workers on daily wages and 30% are salaried or contract employees without any social safety nets.

Similar to the independent surveys’ findings, the Centre for Monitoring Indian Economy estimates that 21 million people have rejoined their employment or jobs after governments started to Unlock. The reversal of job loss – if not incomes – has been achieved and the employment rate is moving towards pre-lockdown levels. Almost two-thirds of the jobs added (14.4 million) were of self-employed (small traders) and wage labourers.

The CMIE reports also mention about 6.8 million daily wage earners lost their jobs since April 2020, and 15 million people took to farming during this period either as self-employed or casual labour.  This reveals that the loss of jobs in self-employment and casual labour category is a temporary or short-term phenomenon, which is not true in case of full-time salaried jobs.

Salaried people (includes both permanent and temporary) who have lost their jobs may not get back to employment in the near future. White-collar jobs in particular, once lost are far more difficult to retrieve.

The CMIE reports that about 18.9 million salaried people lost their jobs, declined by a whopping 22 per cent during the lockdown. Salaried jobs were estimated at 86.1 million in 2019-20, which fell to 67.2 million by July 2020. Salaried jobs are preferred forms of employment for most people as these jobs offer better terms of employment and also better wages.

The biggest loss of jobs among salaried employees was of ‘white-collar professional employees’, which include 5.9 million workers between May-August, 2020. The white-collar workers include engineers, including software engineers, physicians, teachers, accountants, analysts and the type, who are professionally qualified and were employed in some private or government organisation.

The lockdown did not impact white-collar clerical employees. These include largely desk work employees ranging from secretaries and office clerks to BPO/KPO workers and data-entry operators. They possibly shifted to the work-from-home mode, said CMIE.

Since the lockdown was imposed, several companies across sectors have taken to job cuts, along with salary reductions and leave without pay.

This exposes the fragility of India’s formal sector, which is always considered the best job in the market of labourers, highlighting the support it requires for resilience. Ballooning numbers of job losses for formal white-collar workers, having higher value addition, depict a worrisome picture of the Indian job market, with rising unemployment and huge future uncertainty amidst the pandemic and recession.

There is considerable research to indicate that job losses can result in permanent economic damage if workers stay unemployed for too long. This is the keyconcern of policy makers and other stakeholders today.

Towards Resilience for Formalised Jobs

As India unlocks, there are recoveries recorded for casual workers and self-employed with obvious limitations of economic activities. The regular/salaried workers (permanent and temporary jobs) job losses and revised terms of job and salaries owing to the performance of businesses and enterprises, has revealed the fragile state of affairs and is a serious concern for the Indian economy.

Many countries across the world such as USA and UK, are providing various support to the businesses and salaried workers to protect the job losses, such as contribution to salaries, unemployment allowances, loans, etc., often surpassing the debt limits, during the ongoing pandemic and recession.

As we move towards the New Normal of COVID-19 protocols, work from home, virtual economy, digitization and automation at work processes, the white-collar jobs are threatened. In fact, the coronavirus has indeed proven disastrous for them, as we deal with the pandemic and economic crisis.

The Government of India has suggested to businesses that they keep the jobs intact, without any potential and significant support. As India unlocks in the economic recession, formalised jobs (both permanent and temporary) in government and private sector are facing various churns from layoffs, delay payment, reduced payments, and so on.

Clearly the Union government needs to act now, and focus on regenerating economic activities as well as stimulating aggregate demand giving due consideration to those who have lost their white-collar jobs and vulnerable businesses to minimise the losses.

The road towards Self-Reliant India and New India should ensure resilience in the formalised economy, immediate support for workers and their families, and harnessing our data and digital capabilities for significant impact in the lives of people.