With the rebound of the Chinese economy, Belt and Road Initiative (BRI) is on the march again. An Associated Press report from Beijing last Thursday said China is the first major economy to grow since the start of the coronavirus pandemic, recording a 3.2% expansion in the latest quarter following the reopening of factories and stores. Experts expect a "continuous expansion" in the period ahead.

In this context, BRI is returning as the flag carrier of Chinese diplomacy. But there is an added dimension insofar as the BRI is also transforming as a key tool for China to take the lead role in the post-pandemic recovery of the world economy. A recent Chinese commentary claimed that the BRI has "the potential to drive the post-COVID-19 global economic recovery and reconstruction in somewhat the same way that the American Marshall Plan rebuilt devastated Western European economies after World War II".

It is a breathtaking scenario. The Chinese commentary added, "The process is also likely to hasten the emergence of a new world order." The narrative, based on expert option, is that the concept of connectivity that the BRI highlights - especially, among the emerging economies across Afro-Eurasia - can be enlarged and strengthened 'to get people back to work, get food on the table, making sure that people are being paid, that they have jobs to do'.

Thus, BRI should step into the health, education, digital and certain services sectors where "immense growth" potential can be expected in a near term. Overall, BRI hopes to pick up steam in an international environment where the severely battered and weakened US economy will not be able to fund the post-COVID-19 recovery plans of developing countries and emerging economies.

To be sure, there is renewed activism. The proposed 25-year China-Iran Comprehensive Strategic Partnership agreement is almost entirely riveted on the New Silk Road. Its central pillar is a $280 billion Chinese investment in Iran's oil, gas, and petrochemicals sectors, and another $120 billion investment in upgrading Iran's transport and manufacturing infrastructure, which could be front-loaded into the first five-year period.

The strategic partnership between China and Iran becomes a game changer for the BRI. The pact enjoys the backing of Supreme Leader Ali Khamenei, and no matter the propaganda by the US and Israeli outlets, Iranian Majlis will ratify it. In the fullness of time, the BRI can provide a common thread to bring together Iran, the UAE and Saudi Arabia.

In such a backdrop of high expectations, Pakistan announced on Monday that China has agreed to fund the Diamer-Bhasha Dam in Gilgit Baltistan. The estimated cost of the project could be anywhere up to $14 billion. Last Friday, the prime minister hastily kicked off the construction work on the project.

Again, on June 25 and July 6, Pakistan and China signed deals for two hydro-power generation projects costing $3.9 billion in the Pakistan-occupied Kashmir region, and another to revamp the Pakistani railways for $7.2 billion. Islamabad is breathing new life into the BRI after a long period of hibernation since Imran Khan came to power, with an eye on China's massive commitments in Iran that may eclipse the CPEC as a sideshow.

China is yet to comment on the Diamer-Bhasha Dam in Gilgit Baltistan. Interestingly, the Chinese foreign ministry spokesperson instead remarked on July 16, "China applauds the endeavours of Pakistan and Afghanistan to overcome difficulties caused by COVID-19 and resume trade and personnel exchange recently. As a neighbour and friend of both countries, China looks forward to improvement of relations between and economic development in Pakistan and Afghanistan, and stands ready to play a constructive role to this end."

"China supports the extension of CPEC to Afghanistan, which will bring more BRI benefits to the Afghan people. China is also pleased to see the Gwadar port, among other CPEC projects, plays a positive role in this process and stands ready to work together with Pakistan and Afghanistan in this regard."

These tidings have coincided with Beijing's initiative to create a new format with the five Central Asian states at the foreign-minister level - 'China Plus Central Asia' (C+C5). Clearly, the leitmotif is the expansion of the BRI in the Central Asian region, keeping in view the likelihood of peace settlement in Afghanistan as well as the China-Iran strategic partnership agreement. 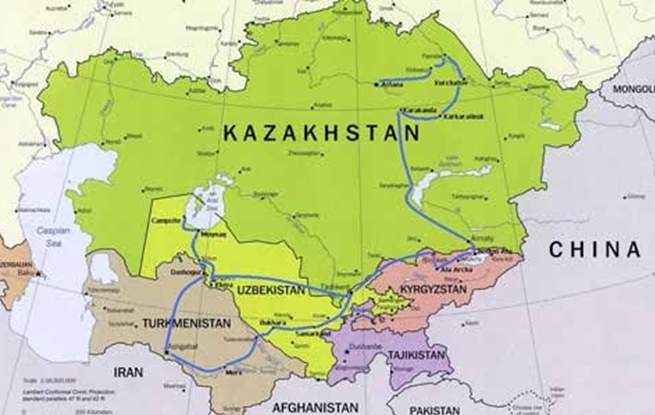 The C+C5 is an exclusive format, although it overlaps the Shanghai Cooperation Organisation (SCO). Indeed, with the induction of India and Pakistan, SCO has somewhat lost its gravitas for Beijing (and Moscow). Besides, China already has a trilateral format separately - the China-Afghanistan-Pakistan Foreign Ministers' Dialogue (which is due to hold its 4th round in the near future.)

On July 16, the C+C5 held its first meeting via video link. Unsurprisingly, the BRI figured as a focal point. In the opening remarks, Chinese Foreign Minister Wang Yi recalled that "The two sides have worked together to advance Belt and Road cooperation." Wang proposed four priority areas of cooperation, including BRI-related areas.

As he put it, "To promote regional connectivity, a transportation route running through Central Asia should be gradually put in place. Cross-border e-commerce should also be expanded and the development of a digital Silk Road accelerated… China calls for the early establishment of a cooperation mechanism to protect the safety and security of major Belt and Road projects to ensure the safe and smooth progress of important cross-border infrastructure projects. Peace talks should be encouraged to advance the peace and reconciliation process in Afghanistan."

In geopolitical terms, C+C5 is Beijing's riposte to the US-led format known as 'C5+1', which was kickstarted by former US Secretary of State John Kerry at Tashkent during a Central Asia tour in November 2015. The C5+1 remained lacklustre and episodic, but this year, Washington dusted it up and already sponsored two meetings under the rubric (February and June). Beijing would have sensed that state secretary Mike Pompeo is up to mischief in the steppes.

At any rate, Wang Yi was rather explicit in his speech on July 16 that C+C5 will have an anti-US orientation. He emphatically cautioned his audience against "attempts by external forces to provoke colour revolutions and play zero-sum games in the region, and meddle in the internal affairs of Central Asian countries under the pretext of human rights". Interestingly, on July 17, Wang called up his Russian counterpart Sergey Lavrov and, inter alia, briefed him on the results of the C+C5 event.

Indeed, the C+C5 meeting reached a nine-point consensus, which amongst other things, noted that "China and Central Asian countries will further enhance their cooperation against Covid-19 and create travel bubbles and green corridors for goods as soon as possible… more efforts will be made to synergies the Belt and Road Initiative and the development strategies of Central Asian countries, expand trade and provide more common ideas and concrete actions on the development of a 'Silk Road of health' and the Digital Silk Road."

To be sure, these fast-paced events of the recent weeks would underscore that, to borrow from Mark Twain, the rumours of the death of the BRI from a virus infection have been greatly exaggerated.