Delhi holds many of the most prestigious academic institutions and expensive retail locations in all of India. But is it possible that glamorous views of Delhi mask a bleaker truth of the real conditions? In fact, between 1999-2000 and 2007-2008, the data clearly points to the fact that in regards to education and income indices, common indicators used to measure economic development, Delhi's performance deteriorated between the two periods (data.gov.in). Whether these statistics are significant, it's unclear with the meager dataavailable, but the need to critically analyze whether perceptions are aligning with the reality of development and economic growth in Delhi is clear.

The human development index (HDI) was developed prior to 1990 out of a need for more qualitative and diverse indices upon recognition that economic growth was not always hitting the mark on how an economy was faring relative to the indicators usually associated with development. Time and time again, scholars have stressed the fact that economic growth is a necessary, but not sufficient condition for growth. Development does not happen in an echo chamber, but it is also not a direct result or cause of growth. The main thrust of The United Nations Development Programme (UNDP) in their creation of HDI is that it aims to show how "growth translates- or fails to translate- into human development in various societies (UNDP 1990)." An easily digestible and widely read publication, The Human Development Report of 1990 brought the relationship between economic growth and development not only to the attention of scholars outside the fields of development studies and economics but also to the lay person. While the measurements have changed over the years since they began indexing HDI, the three sub-indices of measurement have remained the same: knowledge, a decent standard of living, and a long and healthy life (UNDP 2015). Or put more simply: education, income, and health.

The UNDP Report Office that conducts the Human Development Report stakes no claim over HDI. They encourage countries and even smaller sub-regions to not only use HDI, but to modify it to help meet their needs. They even offer detailed descriptions for ways in which regions can adapt HDI to meet their specificities and create an even more comprehensive index (UNDP 2015). A national human development report was released in India titled, National Human Development Report 2001 (NHDR01). They measure nearly 70 indicators from 1980 and they highlight the rural-urban gap and gender gap as significant barriers to development in India. Since it was released in 2001, more than 200 academics and writers have cited it as a source in research or other relevant projects (Google Scholar). NHDR11 included indices from 1999-2000 and 2007-8. For both of these time frames, data is publicly available on HDI for each of the categories and the composites for 22 states and the Northeast (excluding Assam which is part of the prior). This data is shown in Figure 1 below. 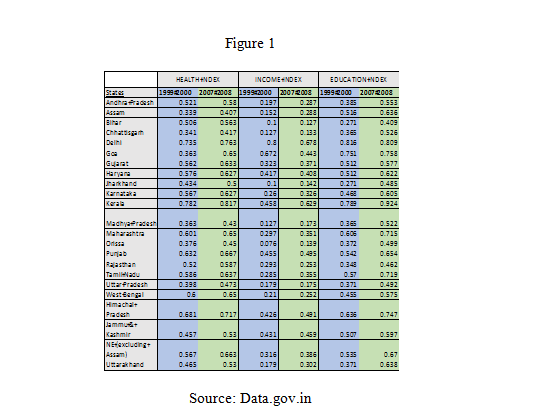 The data at first looks extremely unassuming. The indicators seem to generally be going up, which makes sense even according to the belief that economic growth is the same thing as development as the period of 2000-2008 saw growing economic growth starting to near the double digits after the economic reforms of the 1990s including the opening up of the economy after around 40 years of extremely strict restrictions on financial and physical capital out- and inflows. But even now as we know that economic growth isn't necessarily the same thing as human development, this result of a general upward trend makes sense given India's upward trend in the UNDP calculated HDI since 1990 from 0.428 in 1990 to 0.494 in 2000 to 0.580 in 2010.

The Case of Delhi

But, there is an exception.In Delhi it actually goes down, and in fact not by a negligible amount. Figure 2 below graphs each of the states horizontally with the HDI level. Blue dots represent the HDI 1999-2000 and red dots represent the HDI 2007-2008. Every state shifts blue to red except for Delhi, which shifts red to blue, indicating that the HDI went down over the time period. Another benefit of this graph is that it's easy to see the magnitudes of the changes. It's noticeable that Delhi went down by a fair bit, while many states went up by 2 or 3 times as much as Delhi went down. 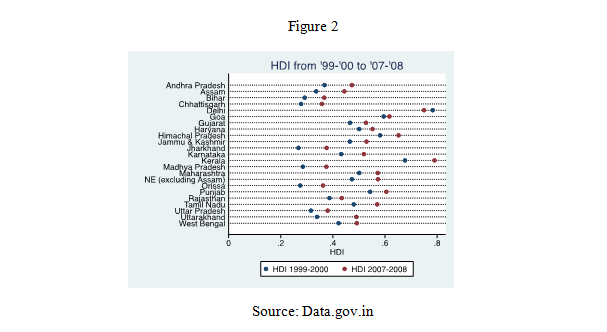 Delhi was fortunate enough to reap some of the benefits of the economic reforms of the 1990s. They emerged as a hub for "major trading, commercial [firms], banking, insurance, retail, and entertainment (NCT GOV. 2002)." Between 1993-4 and 2001-2, Delhi experienced one of the highest average annual rates of growth in India at 4.7% just below West Bengal, Karnataka, and Tamil Nadu. Not only was Delhi performing well on economic growth terms during this period, but India was thriving in economic growth as well. In regular growth rate, India jumped from what was coined the "Hindu rate of growth" of 3.5% from independence to 1980, to 5.6% in the decade 1980-81 to 1989-90 and 5.8% in the following decade. From the decade 2000-01 to 2009-10 which falls closest to our test period, the growth rate jumps up to 7.3%, this is even higher than the growth of the following decade which was 6.1%. This is all to say, that throughout the 115-year period of 1900-01 to 2014-15, the decade in which economic growth was the highest in India was 2000-01 to 2009-10. Economic growth looked so good everywhere that there is still one big question: what happened to the standard of living in Delhi that made it deteriorate in a divergent path from the national economic growth pattern?

Unfortunately the data is not available for any sort of robust analysis. Ironically, while the education index went down in Delhi, the best that can be done on this topic for now is to take an educated guess. The one thing that's obvious is that these results definitely provide a reason to look critically at the state of affairs in Delhi and the discrepency between the economic growth and living conditions. There is a reason why hundreds of economic indicators exist; no one indicator is going to show the big picture. But it's necessary to acknowledge the information we get from each one and HDI is sending a message to reevaluate what the other indicators are telling us, namely the story of economic growth.